While our focus is almost always on the amazing world of food, let’s take a brief break and talk about some of Colombia’s other national treasures. My two brothers and I recently did a trek to the Lost City of Colombia – known as the ‘Ciudad Perdida’ in Spanish or to the local indigenous community as ‘Teyuna’ – in the Sierra Nevada Mountains near the northeastern city of Santa Marta. My youngest brother was getting married, and we thought a bachelor adventure would be a great way for the three of us to hang out, talk and bond… and of course walk. We did A LOT of walking. But I’m getting ahead of myself, let’s start at the beginning. 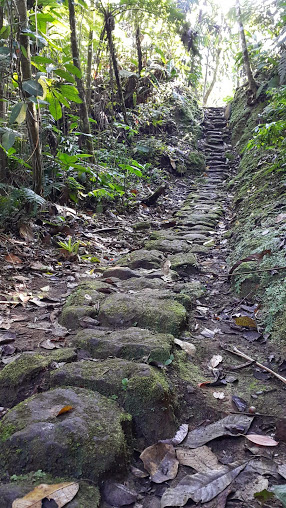 The Lost City was built by the Tayrona tribe around 750 AD but largely abandoned during the conquest of the Spanish in the late 1500s. It was ‘discovered’ by a group of Colombian archaeologists in 1976 after hearing stories about a lost city in the jungle and finding artifacts for sale in local markets as evidence that the place existed. The indigenous community, though, had never actually lost the city, but rather used it for religious ceremonies and other special occasions. At its height, the city was most likely the political and economic center of a network of villages across this mountainous region, and had a population of more than 7,000 people. The city remained a secret to the outside world for so long as it is deep in   the   mountains   and    can   only   be accessed   via   a   steep   climb   up  1,200 stone steps surrounded by dense jungle. While the area was also once strongly affected by the Colombian armed conflict, it is now a safe area for the indigenous communities and tourists alike.

The terrain is absolutely breathtaking, and the trek is like traveling back through time. First is a drive from the city of Santa Marta to Machete, a small typical Colombian town where you have lunch before setting off on your walk. The first day you pass through a number of small farms dotted with houses here and there that become progressively simpler. As you move deeper into the mountains, you begin seeing small communities made up of thatched-roof huts with very few signs of modernity. People here seem to be living largely as their ancestors did hundreds of years ago, surviving on subsistence farming and selling some of their goods at local markets near the coast. 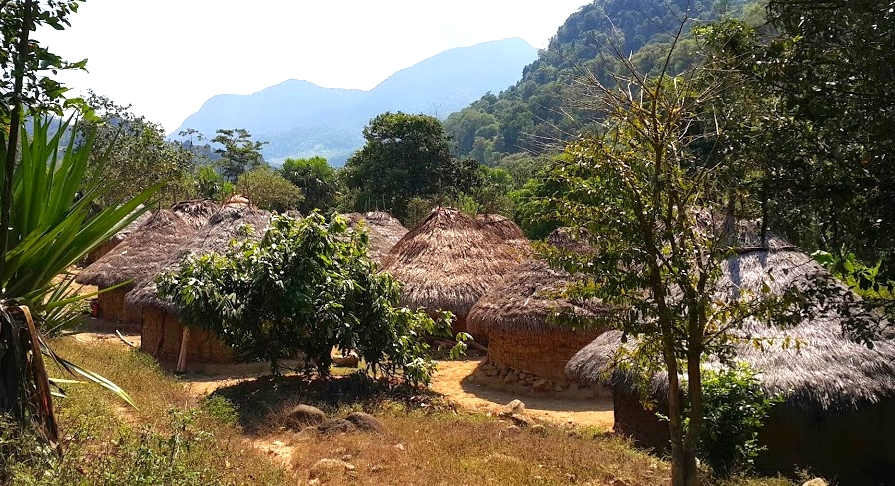 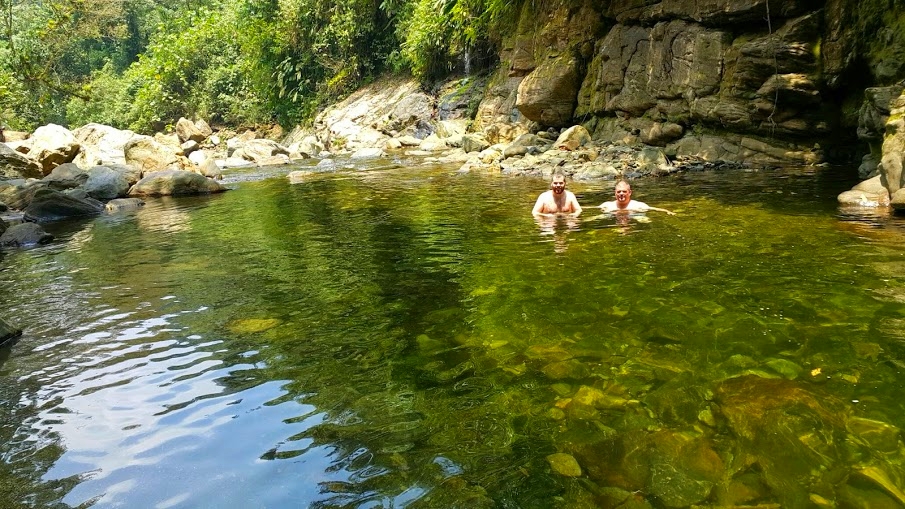 Getting to the Lost City is not for the faint-hearted. The shortest trip is a four day trek (there are five and six day options as well) through rugged terrain climbing up, then down, then up, then down, then up, then… you get the picture. (If you’re looking to sweat off a few pounds, this is the trip for you!) Your reward for making it up another steep hill is fresh tropical fruits and an incredible view across the lush green landscape. Luckily a good part of the trek winds through the mountains following a fresh clear stream, which you have the chance on occasion to strip down to your skivvies and dive right in. It’s amazingly refreshing and gets your body ready to strap on that backpack and get going once again.

The end of a long, hot, exhausting day is signaled by coming over a ridge and seeing your little rustic camp in the valley below. Waiting for you is a cold beer, a hot meal, and a chance to rub down those legs and relax. Dinner is a typical Colombian meal such as Ajiaco (chicken soup) served with corn, rice, avocado, and of course fresh home-made arepas! Everything is done over an open fire, and perfect for your ravenous appetite after a long day on the trail. After dinner and a little conversation with your fellow trekkers, there is only one thing on your mind – sleep! The bunk beds come with a thin foam mattress or you can choose a hammock, but the level of comfort doesn’t really matter as you collapse into a deep sleep and dream of flat ground. 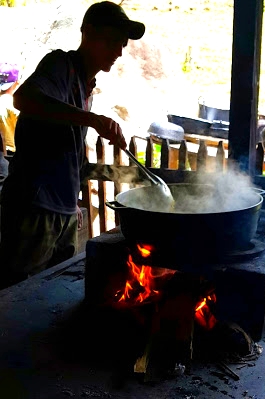 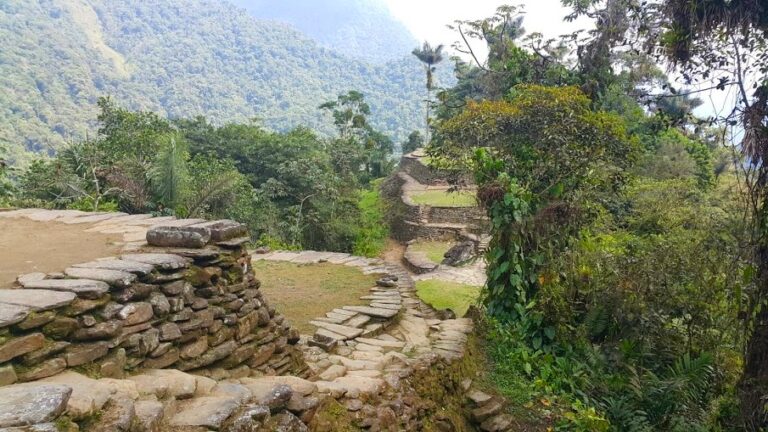 On the third day you finally reach those precipitous 1,200 stone steps that guard the ascent to the Lost City. At the top, the place that awaits is simply amazing. Words cannot do it justice, so I will leave it at that. The feeling might have to do with the amount of effort you exerted to get there, but it may actually be just that remarkable. You’ll have to experience it yourself to find out… 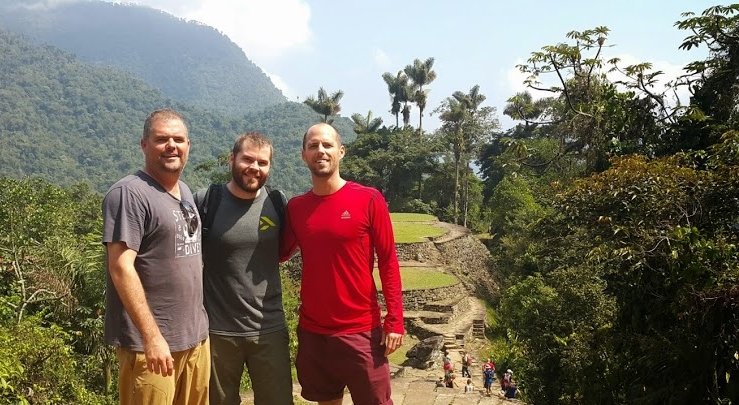 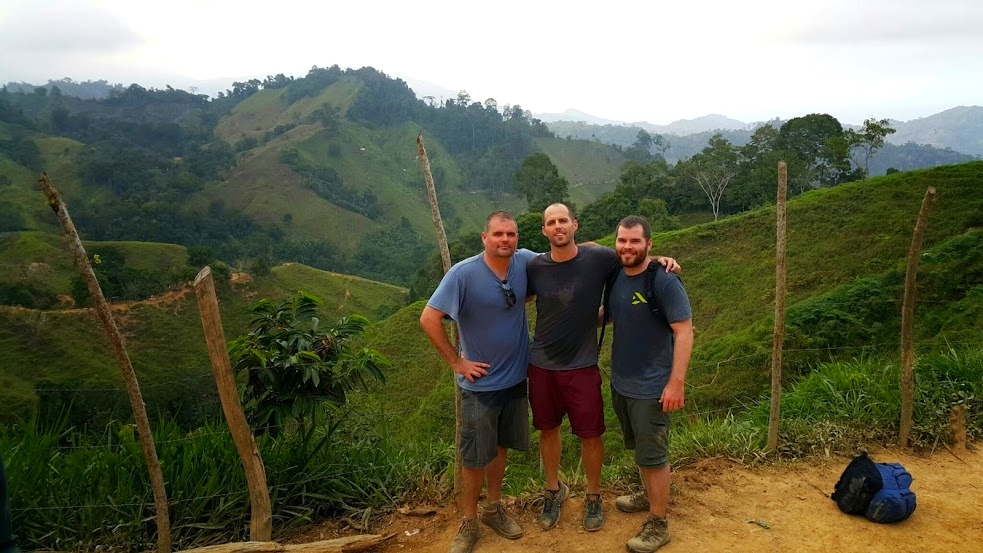 If you’re thinking about tackling the trek to the Lost City, a few words of advice:
–    Do the four day trek. While it’s tough, the five or six day takes the same path and after a while you just really want a hot shower.
–    Shoes, shoes shoes! Bring good comfortable shoes that are already worn in. The girl in our group who wore her old Chuck Taylors had to be put on a mule the last day her feet were so torn up. Not pretty.
–    Breakfast, lunch and dinner are all included, but bring some money for a few beers and a Gatorade or two to rehydrate. The food is not gourmet, but truthfully, after all the exertion pretty much anything they put in front of you is going to taste delicious.
–    Just keep walking. Knees and joints start to hurt, your back aches, and it’s hot. Take it easy with a good leisurely pace. There are no prizes for getting there first, and the whole point is to enjoy the experience!